If you’ve noticed there’s been a distinct lack of blog posts lately, it’s because I’ve been beavering away working with words and writing.

Two main things I’ve been busy with are writing a piece for the journal Nom de Strip and writing press information for Simon Ryders prototype ‘cabinet’ about to be launched at the end of the month.

Nom de Strip had a fantastic success at crowdfunding recently through Kickstarter, so it just shows how much we need it here in the South West of England. I’m writing about artSOUTH, which opens early September around Southampton, Bournemouth, Winchester, Isle of Wight, Portsmouth and Lymington. The map is online and you can book up for talks, trips and a symposium here.  The project is led by Hampshire County Council, curated by Judy Adams, with Gill Nicol of LightsgoingOn overseeing the engagement programme.

Go to their websites to find out more about the artists and the programme. It is particularly interesting to me as it has developed from the ideas behind ExLab last year. Managing such projects brings huge challenges and I look forward to learning from artSOUTH in the same way they have learnt from ExLab.

b-side have a symposium – Resonant Terrains (great name) coming up to, 10th-12th October in Dorset, which is a good place to discuss such matters. Asking the question:

‘If festivals are the new platform, and sites the new venues, what can they offer and what can’t they offer artists, curators and audiences?’

Bringing together artists, curators, producers and other cultural professionals to discuss some pertinent questions about site-based practice and the role of festivals in the changing landscape of arts provision, ‘Resonant Terrains’ will host sonic, sociable and subterranean walks, talks, performance lectures and discussion.

So, last but not least, my update on the work here in the Forest of Dean – Simon Ryder’s new work commissioned to respond to change in the Forest. It’s in production now and will be in both libraries on Thursday 29th August. It IS a prototype and as such we retain the right to modify it in the future, but for now, we’re very excited by what we’re getting. Inspired by fungi and its relationship with hosting trees, it is responding to very ‘natural’ concepts, yet is manufactured using – literally – cutting edge technologies – water jet and laser cutting. Simon’s blog posts about his research are also being printed and presented in a lovely document with a hand-printed cover. Every aspect of this work has been carefully considered and the work itself will be packed into a beautiful box for storage and touring. (That won’t be ready until later).

Whilst this ‘cabinet’ is very particularly about the Forest of dean, Flow intends to commission and tour other works as a collection. Do get in touch if you are interested in this development, I’m looking for partners and host organisations.

And here we are in the forest, scanning branches…. 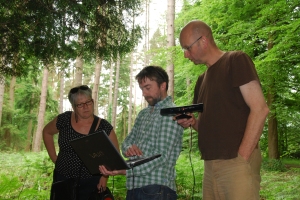