Following up on my previous post about Hiorns’ new work at Hepworth Gallery in Wakefield, which I saw the day before visiting YSP to see Seizure.

I was very disappointed I didn’t see Seizure in London so was excited to hear that it had been moved to YSP into a specially-built chamber to accommodate it. I watched the Guardian video first about moving the work and heard about the details of temperature, the concrete structure to resemble the urban architecture and challenges of transporting it to Wakefield.

I set off to find it, having a good idea of what I was looking for, so it was easy to find and sensitively located, nestled into the landscape not far from the main gallery space, but discrete and low lying. There was a queue – not a big one, just 10 or 12 people, mixed ages, all intrigued. We were let into the outer chamber in small groups due to the limited space, and to give us time to hear from the steward the history of the work for those who hadn’t done their homework. We also put on plastic covers (provided) over our shoes to protect both the work and ourselves. It was like a nesting doll, the concrete chamber containing a smaller one, with an entry through the doorframe into one of the original rooms from the flat.

What did I find in there?

It was as blue as I had expected, glorious, glass-like crystals deselt populated on the walls and ceiling, less so on the floor due to the ever-tramping feet of visitors.

In places the metal grid/mesh that supported the plaster walls is revealed and the intenral skeleton of the architecture revealed.  You could go into a small side area from which the bathroom, completely crystallized, could be seen.

But I did feel disappointed, and I have thought long and hard about why. I will explain.

The original was in a London block of flats that was due to be demolished. The steward at YSP explained that Roger Hiorn’s used to be the postman there, so knew the area well. That was a lovely nugget of the personal, the motivation, the human meets architecture narrative. It was something that opened up space as being more than just space, it made it a place. A place that held meaning for Hiorns.

I imagine it was quite an adventure to find it, and a massive surprise when entering. But at YSP its story has gone ahead of it, the anticipation was too great (for me) – it is almost set up to disappoint. Which is a little sad. Context is all in my work. So I am overly aware of these things. I know, I’m sorry, but it matters to me. A lot.

And for this work too. Of course people who have no prior knowledge of Seizure’s previous location will have another experience of it to me.

I envy them a little. But there is no going back.

Which takes me back to ana rticle I have written for Nom de Strip*about ‘discovering’ art. That article is a preview of artSOUTH, which I have now seen some of, and strongly recommend going. Definitely worth discovering ‘for yourself’ before someone else tells you about it! 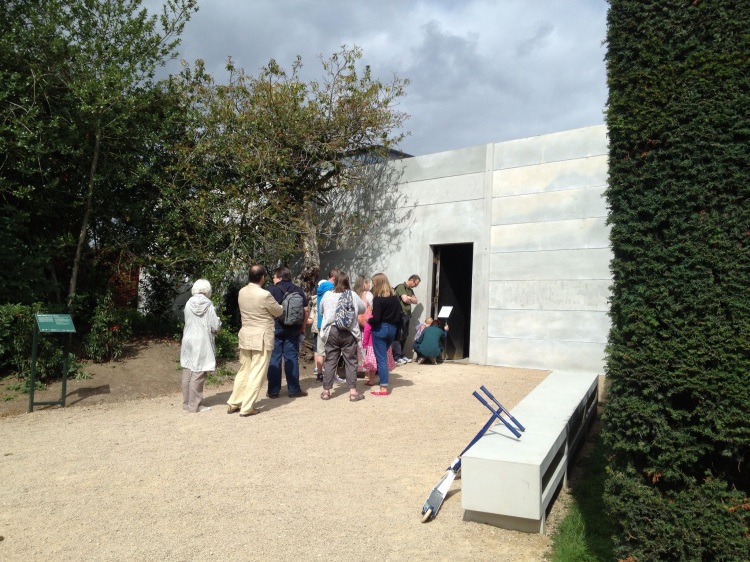 (I couldn’t take a photo as it was not allowed, but you can see several here)

*Nom de Strip is a free journal dedicated to expanding contemporary arts audiences in the south-west. It aims to define the relevance of contemporary art to everyday life and its contribution to the region.

Each themed issue is a collection of critical writing, ideas, artwork and discussions from an intentionally diverse community of people who want to share their views, including professional and aspiring writers, artists, academics, and anyone in between.