What a great strapline and I couldn’t agree more. And who wants normal anyway?

It certainly feels like we in the art sector have been untethered and sent out to sea in a somewhat holey (not holy!) boat without a paddle. Praying isn’t going to help, but discussing it might. Or holding hands with a squeeze, like a raft of floating ants. (I know, I’ve been here before, talking about these ants!) 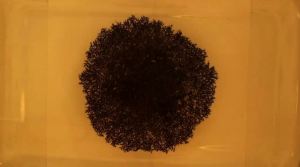 Visit the website for the symposium, some excellent videos and provocations to be viewed or read.

I particularly enjoyed ‘Does culture boost economic growth?’ by Tim Harford, Economist. He questions the common use of the term ‘innovate’ and indeed all the catchphrases we must add to our funding applications. He calls for the funders to rethink how they operate:

He comments on how we are encouraged by funding bodies to hire high paid advisers to teach how to fundraise, even as they stop funding people. I feel there lies a tricky dilemma and have been recently thinking deeply about my role within that. As I mentioned in yesterdays post, I’m increasingly concerned that the squeezed are being squuezed so hard they can no longer breathe. Artists pay me to mentor them, to support them as they struggle to get funding. I know it is needed and I’m sure they would agree if I say it is extremely useful to them. But ethically it doesn’t feel right. I’m not comfortable being put in the place of squeezing the squeezed. But I am also squeezed. You know what? I would rather engage in squeezing the hands of others in a circle as a gesture of support, a sense of collective intelligence and empathy. I am increasingly upset that SO MANY people from every sector are being squeezed…and when I think about the top squeezers, the wealthy minority in the country, I get angry. But anger is not constructive, so I write about it instead. Here.

I want to offer a squeeze of support to those who are struggling and remind them that it is not their fault.

Harford refers to an alternative focus for artists, not innovation that is capitalist led, but led by self-determination……He refers to funding today being modelled on how  ‘corporate America floats the innovation boat’. And the reasoning behind it is to ‘sell us stuff we don’t need to make a marketplace for things we don’t need’.

This also reminds me of a brilliant video by Ellie Harrison I saw yesterday. Anti-Capitalist Aerobics – her ‘revolutionary new exercise programme’ performed at the Ways of Seeing Climate Change conference in Manchester on 30 October 2013.

Harford proposes that the notion of ‘community’ is having the life sucked out of it. And this week I’ve been looking into ABCD and wonder whether this is another example of USA thinking – a ‘business’ model that sounds generous and considered but is essentially ‘Big Society’ – a wolf in sheeps clothing. It may not be, I hope it isn’t, I need to learn more before I can comment properly. I need to talk to people about it.

SO I look forward to the No Boundaries symposium next year, it’s going to be fascinating and hopefully inspiring too.