The warming climate is strongly linked to changes in ecology and ecosystems. Different flora and fauna may have different ways to adapt to climate change, and those that are unable to adapt may become extinct or migrate to different areas. Increased freshwater runoff in recent years from melting ice and increasing rainfall alters the salinity of the ocean, making it less salty. In the Severn Estuary, the seagrass species Zostera noltii prefers a low salinity environment for germination. As such, Welsh seagrass beds have seen increased productivity in recent years. (Severn Estuary Partnership website )

Today I have turned my attention to the marginal plants that will be affected by what is termed ‘coastal squeeze’. The Environment Agency conducted a two year research project that explored the impacts and provided this definition of what coastal squeeze is:

Coastal squeeze is now defined as ‘the loss of natural habitats or deterioration of their quality arising from anthropogenic structures or actions, preventing the landward transgression of those habitats that would otherwise naturally occur in response to sea level rise in conjunction with other coastal processes. Coastal squeeze affects habitat on the seaward side of existing structures.

The sea level is rising at a current rate of 3.2 mm per year4, up from 1.7mm per year for 1901-20105. This means that as time goes on, more of the coastline will become inundated with water. This can cause increased coastal erosion rates, as well as flooding areas which were previously land. This increase in sea level is due to a number of factors, including melting of terrestrial (land-based) ice caps and thermal expansion of the ocean. Thermal expansion is estimated to contribute up to 40% of the increase in sea level. Upon excess heating, the ocean gains energy and expands (see Figure 2).

The image shows what causes the sea level to swell in response to rising temperatures. 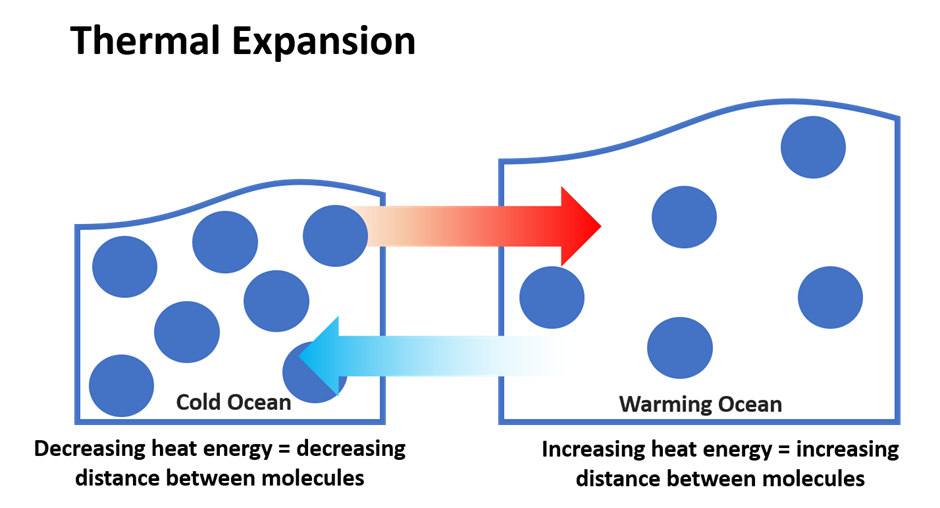 When I first began to explore the Severn, I recall asking a botanist how I can find out where the river is freshwater and where it is saline. The Severn Bore forms here, seawater mingles with freshwater and carries on upriver, before returning to the estuary. He told me that the only way to do that is to look at the plants on the riverbanks. Some plants grow fine in saline water, others don’t. As I read about coastal squeeze I began to wonder about which plants will be affected. This is a whole new learning curve for me, I am just beginning to explore it.

The first thing I did was go down to the riverbank and look for plants that survive just on, or above, the tideline. At this time of the year, there aren’t many.

I gently dug out a few with a kitchen fork, handling their roots carefully and washed the river silt off them when I got home. Then made some monoprints with them.

I haven’t identified them yet – one is chickweed and another looks like it belongs to the dandelion family. The prints are beautiful, but they come with a barb. They may be the equivalent of death masks, of final traces of a species under threat. I am pretty sure these ones are very common. And of course I can’t seek out the rarer species and dig them up. So these can only be metaphorical. They can tell the story, but only so far.

They have made me think too about other non-human victims of sea levels rising, and temperatures getting higher too. The Bewick swans that frequent Slimbridge Wildfowl Centre downriver may not come any more, needing to seek colder waters in northern climes.

I have a lot to learn. I find through making images I can begin to understand the complexity. There is a long way to go. But just flagging up the risks is not enough, there need to be solutions. We can’t wear blinkers and hope it goes away.