trying to capture the experience of viewing wildlife on the river is another….

I used to create video installations and have recently started to dabble with film again. Inspired by the wonderful William Kentridge, I decided to try working with animated drawing.

Of course, I returned to the river as my muse. This is my first attmept and I am quite pleased with it. Not perfect, much more to learn, but it does what I set out to do. My next challenge will be using the flash of blue the eye registers when a kingfisher does a fly-by. In truth, we don’t ‘see’ a kingfisher in flight, we notice the movement, the colours, the speed, the pattern of it’s travel and we name it.

The egret, indeed the river, was drawn totally from memory…I love it when the egrets visit. Usually, there are a pair of little egret here near Newnham. Last week I saw a pair of huge white herons fly over my head and I believe they were great egrets. Isn’t life exciting!

On the morning of Christmas Eve, she wandered down to the bank of the Severn to watch the bore as it formed on the bend between Awre and Arlingham. A fire was burning in the centre of the river, nearby a row of surfers stood to attention, clasping their boards, like herons waiting for their supper.

She had seen this sight many times before, but today was special, as she had the bank to herself. Most people only turn out to see four-star waves, the timetable for Christmas Eve was a humble two-star. As she so often did, she filmed the event on her mobile phone and posted it onto YouTube.

When the wave arrived there were eight or nine surfers riding it, by the time it had passed all but one had fallen off, whooping and yelping as they did so. One man left standing, silhouetted against a soft dawn sky as this busy day began.

Maybe it was one-star after all.

Christmas Eve is family time, with visitors, friends and lovers. By bedtime she went off to sleep quite quickly, but later was woken by a strange dream. One of those dreams that plays on one’s fears, when current affairs and children’s stories become peppered with time and space, creating strange collisions and collusions. In her dream, there were drones flying in the sky, trying to attack Santa and the reindeer. The reindeer fled and a woman tried to call them back, singing kulning songs. But they didn’t respond to her yearning call and Santa fell from the sky with a bump. He tried to get a back-up team of helpers, but because of Brexit, none could get their visa’s in time. Many had passport problems too, because travelling around had been pretty easy prior to the UK splitting from the EU. It was chaos and no-one seemed to be able to help.

She woke with a start, feeling very disturbed. She looked at her clock, it was 3.a.m. Children all over the country would wake up soon and find nothing. She turned to Twitter to see if there were any reports about drones. There’d been a few sightings, of both drones and Santa, but it’s hard to believe social media. Yet only days ago Gatwick Airport had been grounded and lots of travel disrupted because they thought drones were there. Which means even if the drone part about Santa’s story was only a dream, it doesn’t mean it wouldn’t cause chaos. Fake news can gain as much attention as real news these days.

Comforted by the fact that it was unlikely to be true, she rolled over and went back to sleep.

Christmas morning! She raced down the stairs, put the kettle on, grabbed boots, scarf, coat and gloves, made tea and rushed out the door. Another two-star bore predicted but she needed to be reassured that the world had not gone badly wrong. She was early, and she stood in the wonderful silence of the dawn, a still, dull day. The ducks flew over her head, reminding her of the drone. She recalled that when she edited her video yesterday, she saw there was a drone in the footage, one she had not spotted in her viewfinder while filming. She shuddered as she recalled her dream of drones and Brexit.

With no-one to watch her, she decided to try kulning. She had often thought of doing this to call the bore in, but that seemed a bit silly. But here, now, she could try and call the reindeer in. She found a firm area of mud, one the surfers used to climb in and out of the riverbed, and waded and squelched to centre-river. There she stood, facing south. She took a deep breath and called…..ah ho kee, keee-oh-hoo-hoo, ah ho hee hoo, hee-oooooo-he-hoo….

Nothing happened. The riverbed remained dry in the centre, the waters flowed gently in both directions. Her heart sank, as did her feet, no reindeer, no bore.  She was covered in mud.

As she climbed out onto the bank she felt very sad. Maybe she got the time wrong? She checked her watch and yes, she had! It wasn’t due for another half hour! Typical! She decided to nip home and refresh her cup of tea and change her boots, as they were very sticky with river silt.

By the time she returned there were flames again on the sand spit and about five or six surfers. One was dressed as Santa, which always made her smile. As she set up her camera, she spotted lots of debris trapped around the timber frame of the old ferry crossing. Old pallets bobbed about, bumping into each other. Could they be the very same pallets from the sleigh that carried the presents? It was a brown grey day with very little colour, so the splash of red bobbing in the water caught her eye as she zoomed in. A big red plastic bucket, the kind that would hold reindeer food! She was back in her dream and anxiously looked up into the sky. No drones today. Phew.

She heard the bore approaching and wondered, with a wry smile, whether it had heard her singing. She turned her video on and tracked the wave as it passed, dropping off surfers as it did so – no good rides today. As she filmed, she captured the pallets and the buckets, hoping to seem them washed away. Large branches rushed past on the ride, not unlike antlers. She shuddered again. She decided that when she got home to edit, she would examine the footage for drones.

She attached all the cables and went to export the footage. Oh no! She had one still picture, that was all. She had not worn her glasses and had pressed the wrong button. She had no evidence to her story, no Santa, no bucket or pallets.

So she wrote this story instead, to record just how much life can get in the way of imagination, but can also add to it too. Did she really sing in the river?  Was there really a red bucket belonging to Rudolph in the river? Were those actually broken bits of Santa’s sleigh?

Who knows, but what we can be reassured of, is children everywhere today will enjoy their presents and hopefully, if the nightmare was not true, then Brexit won’t happen either. Ever. 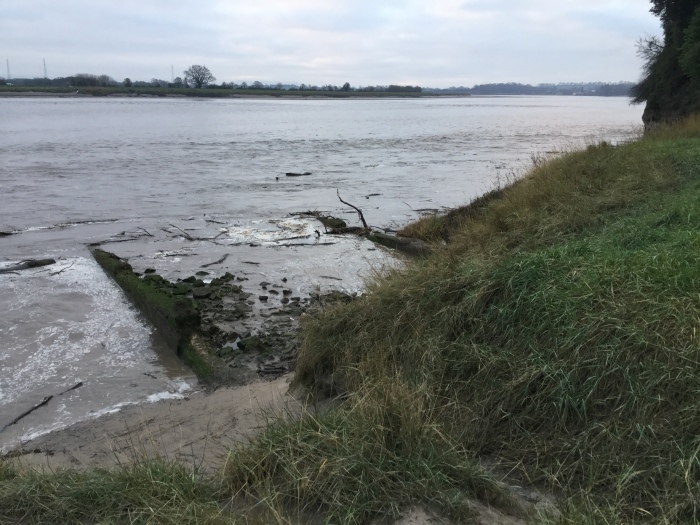 I’m trying to get my head around this wonderful camera and what it can do. This is my first footage, made this morning in the snow. I did a lot of stills, which are wonderful, but this is the only video I did. Would love feedback – it’s raw, unedited footage, and clunky….but rather beautiful.

thank you too Google Street View for the loan of the camera.

WINTER WALK BY THE SEVERN VIDEO

view a 360degree version of one of these here

and here are some stills, (c) carolyn black 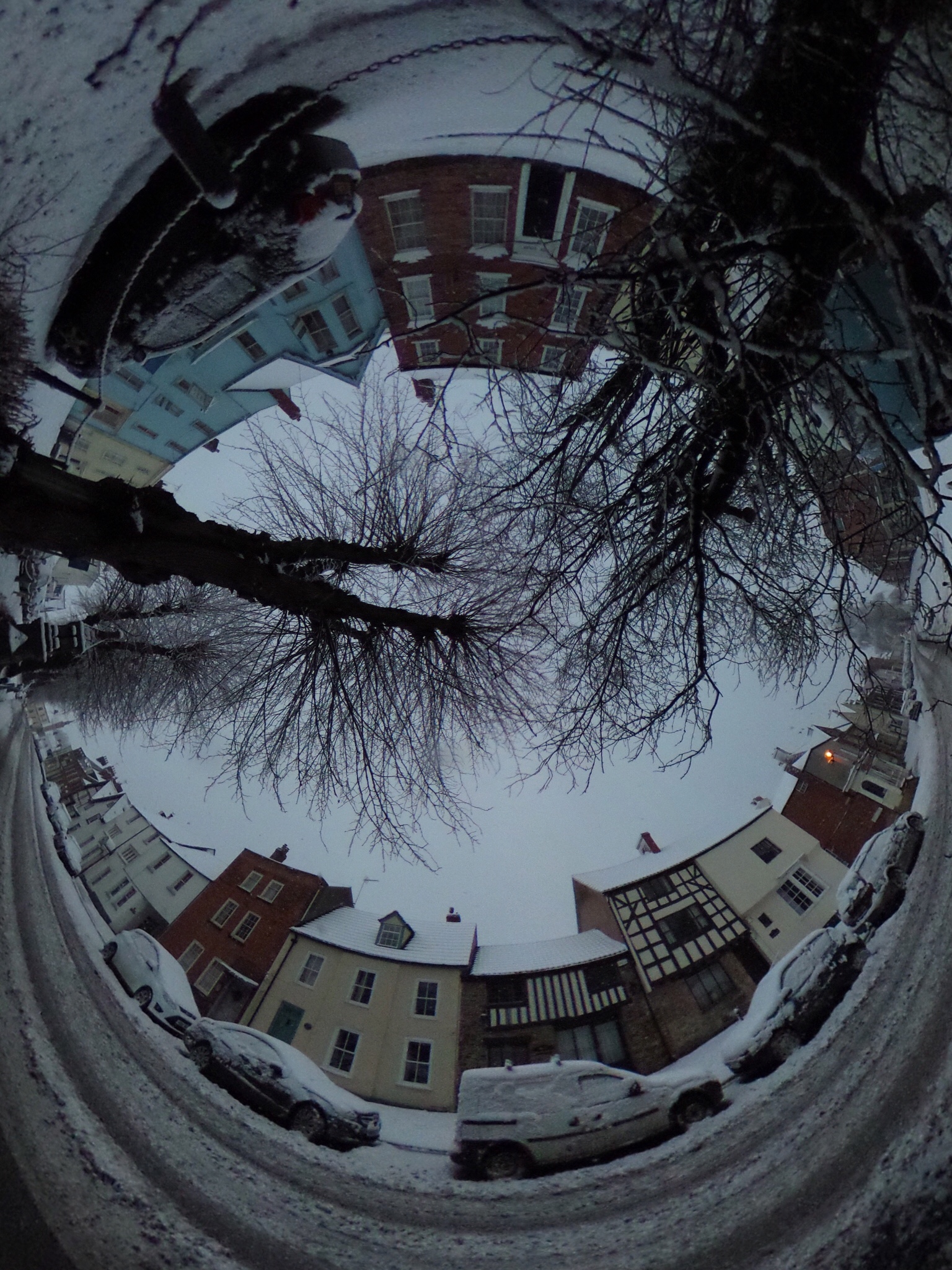 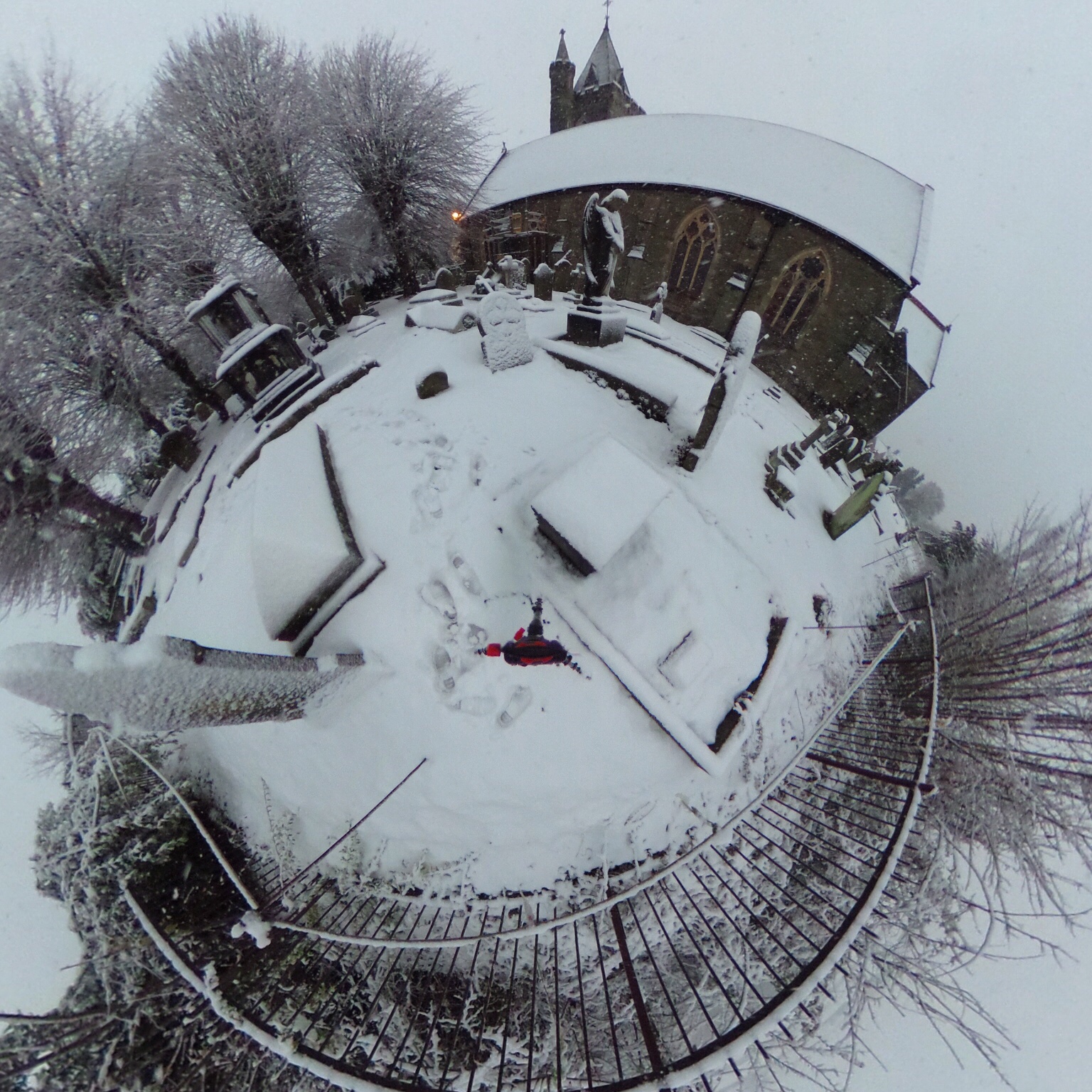