I really enjoyed the ‘Intercourse’ event (love that title!) – “I’m not sitting at the front” last weekend. It made me think – a lot.

The focus was participatory visual arts practice and involved great talks by Gill Nicol and Sophie Hope, interspersed with actions created by artists, which, as a member of the audience, I participated in.

I sat at the front.

There was quite a lot of writing going on, writing stories, writing lists, writing postits. And stickers. Stickers were distributed to categorize us, as a means of creating roles that, if one wished, could be subverted. But few did so. We listened quite a lot too. Sometimes I felt I was being instructed and directed, I complied rather than participated. On reflection, I find myself wondering about where the participatory element was.

By my very presence, was it assumed that I would passively do as I was told?

Was the purpose to antagonize?

Or stimulate a response?

Were we expected to intervene?

There were instructions, but in many ways we were all passive and politely conformed to the traditions we are familiar with – that of speaker and listener. The rules were unstated, because we already knew them, the context provided them.

My lists were in response to their lists

When I contemplated writing this, I was going to share my lists with you. But I decided not to. The Flow Contemporary arts logo implies bi-directional movement – exchange, reciprocity, true partnership working. That is important to me. I make no call to action. I seek dialogue, resolution and harmony, not antagonism. Might this be an age thing?

photo of Emma Gee, by me……during our silent walk through Cardiff 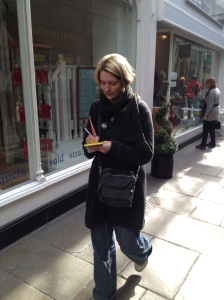